Monitoring resource usage in a pool of micro-partitions

Micro-partitioning is a very good facility to achieve the highest CPU resource utilization. When monitoring CPU pool resource usage, even good tools such as topas_nmon and lparstat exhibit problems and limitations. For example, we know of no tool today capable of displaying a CPU pool’s micro-partitions in one view as members of that CPU pool.
In general, IBM advises that if you keep the free cpu ratio in the pool to over 30%. In real-world usage, the PowerVM idle of the pool will usually drop below 30%, an indication that you’re utilizing more resources. This situation requires that the System administrator keep an eye on resource utilization of the CPU pool.

Now, wouldn’t it be great for the system administrator or engineer to have a tool that:

onTune SPA is a Server Performance and Analysis tool that provides the capabilities described above for monitoring resource usage in Micro-partition CPU pools. The graph below present the capabilities in one view. 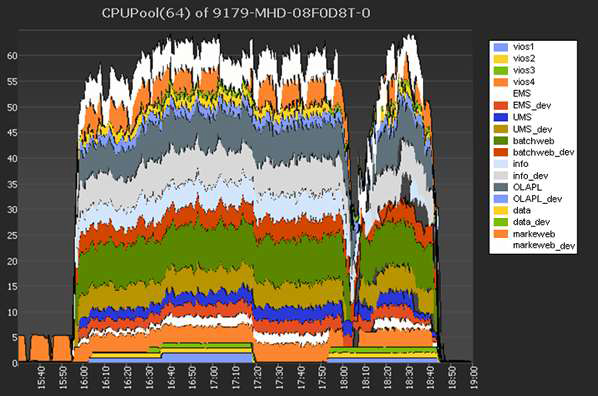 The Monitoring interval is in seconds. (shown actual interval is 2 seconds, 10 minutes between time labels)

In addition, onTune SPA is able to discover the partition and pool information automatically, as shown in the dialogue panel below, and the above chart. No additional manual steps or operations are needed to obtain the above chart view.

The ability to monitor resource usage in a micro-partition CPU pool with the utility described above is only one of the many capabilities of onTune SPA.

Ontune SPA was developed by and for System Administrators and Engineers to give them the tools to monitor and analyze system performance in complex multi-server and virtualized environments. It is a comprehensive Server Performance and Analysis Tool available for AIX, HPUX, Solaris, and Linux (including Oracle Exadata)

Visit http://www.ontune.us for more information and to download free trial.

“onTune SPA has all the functionality we need, and none of the fancy stuff we don’t want…” Retail Customer